The Bodu Bala Sena (BBS – translated as the Buddhist Power Force) is a radical Sinhalese Buddhist nationalist organisation based in Colombo, Sri Lanka that was formed during 2012. The BBS seeks the enforcement of Buddhist predominance in Sri Lanka. It has organised various campaigns against the country’s minority Muslim and Christian communities which, according to the organisation, poses a threat to Sri Lanka’s Sinhalese-Buddhist identity. The BBS engages in hate speech and attacks against minority religions.  Its headquarters are located at Sri Sambuddha Jayanthi Mandira in Colombo. Sri Sambuddha Jayanthi Mandira is owned by the Buddhist Cultural Centre, an organisation founded by Kirama Wimalajothi.

Ethnicity and religion are closely linked in Sri Lanka, with the Sinhalese majority predominantly Buddhist, the Tamils mostly Hindu, and Muslims regarded as a separate ethnic group.

Allegations persist that the BBS enjoys a close relationship with the Sri Lanka government and has seemingly been immune from prosecution. These allegations mainly relate to the Sri Lankan President’s brother, Gotabaya Rajapaksa, who is regarded as a patron of the BBS. During March 2013, he officiated at the opening of a BBS cultural centre at the port city of Galle, currently used as training centre by the BBS. 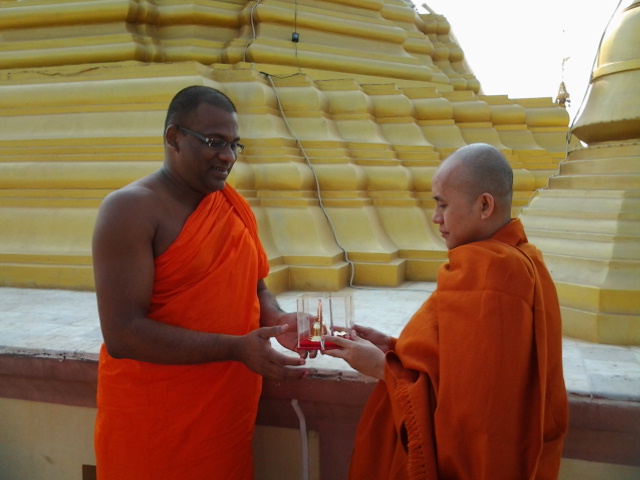 The BBS has a Facebook page called “My Conscience”, with more than 8,000 followers, which shows a lion, a symbol of the Sinhalese, devouring a wild boar depicted with a crescent and star on its forehead.

The BBS’s mission is to “save the Sinhala race,” which makes up 74 per cent of the population in Sri Lanka, by means of non-violent and violent attacks on places of worship. At rallies, monks claimed Muslims are out to recruit children, marry Buddhist women and divide the country. Their extremist ideology is seen in violent attacks, calls for the boycotts of Muslim-owned businesses and properties, bans on headscarves and halal foods and derogatory language to describe Muslim Imams.

At one meeting Gnanasara called on each Buddhist to become “an unofficial policeman against Muslim extremism” and said “so-called democrats” were destroying the Sinhala race. Gnanasara also referred to Muslims: “We want to stop this extremist work of Muslims. They are not going to destroy our culture. Buddhist people are very peaceful.”